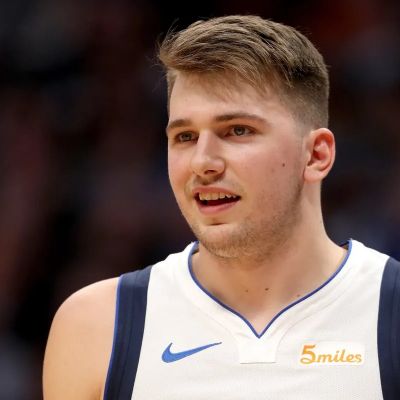 Luka Doncic is a Slovenian professional basketball player. Luka Doncic plays for the Slovenian national team as well as the NBA’s Dallas Mavericks (NBA). Luka signed a two-year deal with Nike in 2017.

He has been selected as an NBA All-Star, All-NBA First Team, and NBA Rookie of the Year after breaking various NBA and EuroLeague champion records.

Luka Doncic was born in the Slovenian capital of Ljubljana on February 28, 1999.

He is the son of Sasa Doncic, a basketball coach and former player, and Mirjam Poterbin, a beauty salon owner.

It’s unclear whether or not he has any siblings.

His mother was given custody and formal guardianship after his parents split in 2008.

His ethnicity is White and his nationality is Slovenian.

His mother is Slovenian, while his father is a Slovenian from Kosovo with Serbian ancestry.

Luka first touched a basketball when he was seven months old, and by the age of one, he was playing with a toy hoop.

He participated in a variety of sports as a child but eventually stopped due to his height.

When he was seven years old, he began playing basketball at a primary school in Ljubljana against children as young as ten years old.

His green eyes and brown hair, as well as his athletic body composition, accentuate his beautiful skin.

Luka Doncic’s net worth is estimated to be $8 million.

He had also signed a multi-year endorsement deal with Air Jordan in December 2019.

With this Jordan deal, Luka wears shoes including the Air Jordan 35 and the Jordan React Elevation.

Luka began practicing with 11-year-old youngsters at the invitation of Olimpija Basketball School coach Grega Brezovec when he was just eight years old.

He would practice with the under-14 team next season, but according to league rules, he could only play for Olimpija’s under-12 team.

Despite finishing second to FC Barcelona in the under-14 Vasas Intesa Sanpaolo Cup in Budapest in September 2011, he was named the Most Valuable Player (MVP).

Luka was loaned to Real Madrid in February 2012 for the Minicopa Endesa, a Spanish club competition for under-14s.

He was the leading scorer for Olimpija in the under-13 Lido do Roma Tournament in April 2012, with 34.5 points per game. He was chosen MVP of the game.

Luka signed a five-year contract with Real Madrid when he was 13 years old, in September 2012.

With 25 points, 16 rebounds, and 5 steals in the final game, he helped the squad upset FC Barcelona.

In a game against the Gran Canaria youth squad in March, he scored 25 points and helped his team win the championship games.

Luke spent the 2014-15 season primarily with the under-18 and reserve teams.

With the reserve team, he helped the Liga EBA win Group B, the amateur fourth division of Spanish basketball.

He won the under-18 Ciutat de L’Hospitalet Tournament in January 2015, despite being two years younger than the rest of the team, and was named to the All-Tournament Team.

He won the under-18 Next Generation Tournament in May 2015, defeating defending winners Crvena Zvezda Belgrade in the final.

Luka made his professional debut for Real Madrid on April 30, 2015. He was playing Unicaja in the Liga ACB.

At the age of 16 years, two months, and two days, he became the youngest player to ever play for Real Madrid.

Luka was also the league’s third-youngest début, trailing only Ricky Rubio and Angel Rebolo in age.

Luka was a regular member of Real Madrid’s senior team during the 2015-16 season.

He had four rebounds, one assist, and one block in an NBA preseason game against the Boston Celtics on October 8, 2015.

On October 16, he made his EuroLeague debut at the age of sixteen.

He was the 21st player to make his EuroLeague debut before turning 17 years old.

On November 29, he set a new ACB record for most points and highest Performance Index Rating (PIR) in an under-17 game by scoring 15 points, 6 rebounds, and 4 assists versus Bilbao.

He averaged 3.5 points, 2.3 rebounds, and 2 assists per game in 12 EuroLeague appearances.

Luka debuted this season against Unicaja, scoring 6 points and dishing out 4 assists in just 19 minutes.

On October 3, 2016, he also appeared in an NBA preseason game, scoring 3 points, 5 rebounds, and 4 assists against the Oklahoma City Thunder.

In a 92–76 win over Montakit Fuenlabrada on December 4, he had a double-double of 23 points and 11 assists, both season highs. In addition, this game earned him his first ACB player of the week award.

Luka led the squad with 17 points in a EuroLeague victory over algiris Kaunas on December 8, 2016

On December 22, he became the youngest player to be awarded MVP of the Round after scoring 16 points, 6 rebounds, 5 assists, and 3 steals in a 95-72 win over Brose Bamberg.

Luka set a season-high with 23 points against Baskonia in the Spanish King’s Cup on February 18.

He guided Real Madrid to a EuroLeague Final Four berth with 11 points, 5 rebounds, and 7 assists in the 2017 EuroLeague Playoffs.

In addition, he was named MVP of the Round. He averaged 7.5 points, 4.4 rebounds, and 3 assists per game in 42 ACB games this season.

Luka made his season debut against MoraBanc Andorra, scoring 8 points, grabbing 6 rebounds, and dishing out 4 assists in a 94-88 victory.

On October 12, he scored a career-high 27 points in his first EuroLeague game of the season.

He was crowned EuroLeague MVP of the Round on October 24 following a performance that included 27 points, 8 rebounds, 5 assists, and 3 steals.

He was crowned MVP two days later after scoring a career-high 28 points in an 87-66 win over Zalgiris Kaunas.

Luka became the youngest player in EuroLeague history to earn MVP of the Month.

On December 8, he set a career-high with 33 points, 6 rebounds, and 4 assists against Olympiacos Piraeus.

He was named the ACB Player of the Month for the month of December for the first time.

He also became the league’s youngest MVP winner, averaging 16 points, 4.9 rebounds, and 4.3 assists per game in 33 EuroLeague games while leading the league in PIR.

He won EuroLeague Rising Star for the third time in a row, as well as ACB Best Young Player and MVP awards.

On October 20, he became the franchise’s youngest 20-point scorer in a game against the Minnesota Timberwolves.

In November 2018, he was named Western Conference Rookie of the Month. On December 28, Dončić scored 34 points and became the youngest NBA player to make seven three-pointers in a game.

Luka scored his first NBA triple-double with 18 points, 11 rebounds, and 10 assists against Milwaukee Bucks on January 21.

Besides, he became the second-youngest player in NBA history to do so, the first being Markelle Fultz.

He recorded a season-high 35 points and his second NBA triple-double against the Toronto Raptors on January 27.

He became the fifth player in NBA history to average at least 20 points, 5 rebounds, and 5 assists in his rookie year. In June, he became the recipient of the NBA Rookie of the Year Award.

Additionally, he also became the youngest player to have 35-point triple-doubles in succession. Luka is also the youngest European player during the 2019-20 season to start in an NBA All-Star Game.

He recorded his 22nd career triple-double, the most in franchise history, on March 4. On August 4, in a game against the Sacramento Kings, he became the youngest player to score 30+ points, 20+ rebounds, and 10+ assists.

On August 8, Luka had a career-high 19 assists in a game against Milwaukee Bucks. Besides, he scored his 17th triple-double for the season and became the youngest player to lead the NBA in triple-doubles.

Luka played his first NBA Playoffs on August 17 and scored 42 points, which is the most points ever in an NBA playoffs debut.

On August 23, he became the youngest player in NBA postseason history with a 40-point triple-double, scoring 43 points against the LA Clippers.

After Tim Duncan, he became the second player to be selected to an All-NBA First Team in a first or second season on September 16.

In April 2021, during the match between Dallas Mavericks and Memphis Grizzlies, Luka shocked everyone in the NBA with his winning shot. Apparently, the Mavericks were trailing 113-111, while Memphis had two foul shots.

Well, these two shots would have given an easy win for Memphis, however, they missed the shot. Also, Mavericks had only 1.8 seconds to seal the game and Luka gained that ball in his hand.

Anyways, he portrayed an off-balance, one-footed, buzzer-beating, 3-point floater. That became the talk on Twitter right instant and even LeBron James tweeted it.

Both Luka and Kristaps have been the base for forwarding in Dallas Mavericks.

Even though, they seemed quite good with each other, Mavericks owner Mark Cuban’s comment made everyone suspicious of what was inside.

With loads of ongoing talks about the two, Tim MacMahon joined Zach Lowe on The Lowe Podcast to share what’s between them.

As per him, Kristaps doesn’t enjoy playing much for both Dallas and Luka.

However, he has a difficult contract for a trade.

In December 2014, on the junior national team, Luka took part in a friendly tournament in Székesfehérvár, Hungary, and averaged 35.3 points and 7.6 rebounds per game, while shooting 81 percent on two-pointers and 57 percent on three-pointers.

Luka had announced that he would be in the senior men’s Slovenian national team for the rest of his career on September 22, 2016.

He was a Slovenian squad member for EuroBasket 2017, where Slovenia won its first gold medal. He was named to the competition’s All-Tournament Team.

He doesn’t have any kids. Radoslav Nesterovic, a former NBA player, is his godfather.

He has a Pomeranian dog named Hugo.

He has four tattoos: a tiger on his left forearm, EuroBasket 2017 cup on his right hip, the Latin phrase “Nondesigns, nonexperts,” and his jersey number 7. 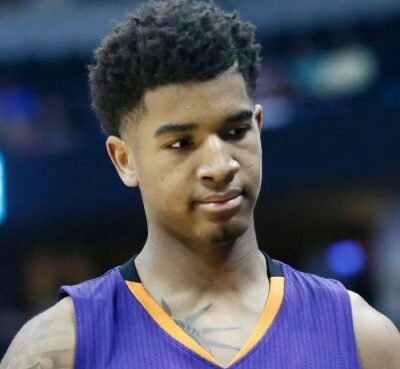 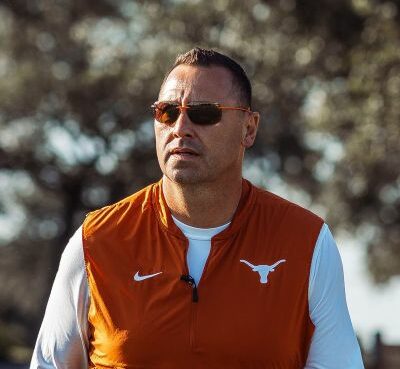 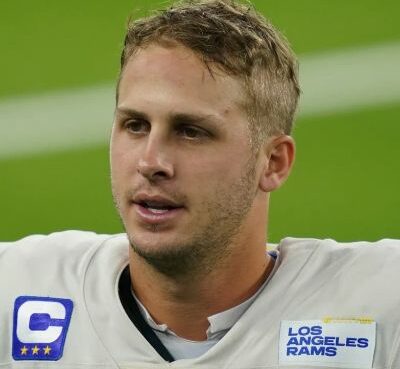 Jared Goff is a professional football player. Jared Goff has been an important player and leader for the LA Rams after being selected in the 2016 first round. In his first season in the top-flight foo
Read More